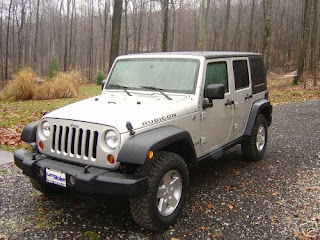 Well, it has finally happened. Mike got a new car today! I've felt bad for him because he always got the "hand-me-downs" from me. For instance, when Chloe was born, we bought a Chrysler Sebring as our family car. Then right before we had Emily, we bought me a Mini Van and he got the Sebring. He HATED that car, but we (mostly I) wanted to wait until it was paid off to get him something different. Well it would have been paid off in July, but he found a deal now that was too good for him to pass up. So, he went and sold his car on Wednesday. He's been looking for a car for the past couple of years, mainly a Jeep. At work, he found someone trying to sell theirs.Apparently they've been trying for a while because they had to lower the price $5,000 (under the trade in value!) for anyone to show any interest. Mike became VERY interested. It's a Jeep Rubicon Unlimited, so it's the kind that has 4 doors. At first I wasn't too thrilled, the gas mileage, was it kid friendly, the GAS MILEAGE! But, I knew how badly he wanted to get rid of his car and how much he wanted this Jeep. I wonder if he'll let me drive it.....
Posted by Sue at 7:12 PM