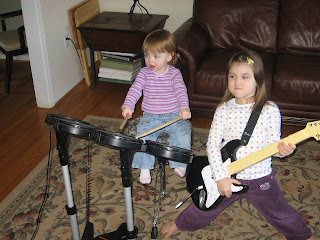 Since it came out, Mike has been wanting to get Rock Band for our PS3, but it was a lot of money to spend on a game. So we waited. For Christmas, he got some gift cards to Best Buy, so off he went to buy it. I have to admit, I wasn't too thrilled about getting it. I know how much he loves to play video games and we have a big job to do around here. (Moving the playroom to the basement, but that's for another blog) Well, I love it! I'm the drummer, and he plays the guitar. Sometimes we switch it up and take turns singing. When we pull it out to play, Chloe likes to try and play the guitar. She hits some of the notes, but really she just likes the feeling of being a rock star. (Wouldn't we all?) I decided to put up a picture of the last time we played.
Posted by Sue at 10:00 AM

Cute...I LOVE me some Rockband! Will and I haven't played in a while, what with our own projects. I'm glad you guys have it now, it's fun to play over the network (as long as you can't hear me sing, hehe =) Congrats on getting your blog up!

OHG! I LOVE the expression on Chloe's face!!